"We are constantly changing to grow with what is happening in todays world/society." - Diana Holland 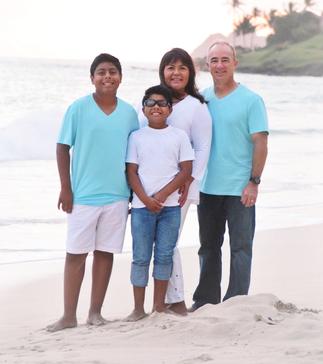 Cutting Zone is a family owned and operated salon located in the heart of Downtown Kailua, who's owners are Diana Holland and her husband, Bob Holland.​

Cutting Zone first opened their doors as a three chair salon in February,1995.

24 years later, Cutting Zone now has expanded as an 8 chair salon in an aesthetic room.

Originally coming from the state of Oregon, The Hollands were convinced by a close friend, Kalei Chang who was a born-and-raised Hawai'i boy, to move to the Islands after college.

While managing The Cutting Zone for over 22 years, Bob Holland has managed an exciting and successful career with the Honolulu Fire Department. The Hollands are also very grateful for their two lovely boys, Kamuela age 10 and Malakai age 11, who were adopted from Guatemala.

Diana Holland states that The Cutting Zone came from a simple idea when she realized that she could rent the entire space for the same amount as she was renting her chair. Although it took a lot of time and planning, the thought of renting this space was an idea that just fell into her lap. Diana believes that there is always room for change and growth at The Cutting Zone, even when things start to feel stale, her and her team always find a way to keep the salon moving in the right direction.  Although her and her team want to keep the salon very edgy, it will always be a very family oriented company, welcoming all ages from infants to seniors. The opportunity has continued to to keep the salon growing, but most importantly to continue creating a positive impact for the people in Kailua.